Are you the kind of person who seeks out the more unusual side of sightseeing? Do you have a strong aversion to typical tourist destinations? Or, maybe you’ve visited Ontario multiple times and want to experience something new.

For those with a taste for the unusual, here’s a list of some of the more unique attractions to check out when visiting Ontario.

A walk-through of Toronto’s elaborate sewer system is a chance to see a different side of the city, literally.

Toronto’s sewer system is architecturally beautiful, and a testament to the city’s planning and maintenance of its water systems. Walking through the sewers is like a wetter version of the city’s subway system.

Toronto’s sewers aren’t your typical attraction, and entering the system requires crawling into a manhole or other entrance. If you want to tour the sewers, you need the permission and guidance by a public works employee.

The Cheltenham Badlands are a prime example of how poor farming practices and resource management can render fertile land utterly useless. The badlands are barren and unable to produce anything other than sparse shrubbery.

Visiting the Cheltenham Badlands is eerily beautiful. However, if you visit after it rains, or if the ground appears soft, visitors are advised to stay off of the hills as the land is extremely fragile and could result in a nasty red stain for the rest of your stay in Ontario.

Once called the “Coney Island of Michigan,” this theme park was constructed in 1898 and was only accessible by steamboat. It contained numerous rides and was a popular destination for nearly 100 years.

However, as other amusement parks like Cedar Point opened, attendance at Bobo Island’s park dropped until its doors closed in 1993.  The small island may not be forgotten, but it is a far cry from its hay day as an entertainment destination for people in Canada and the US.

The best way to view the park without risking breaking trespassing laws is by seeing it from a kayak or other boat.

Located in Bowmanville, this WWII-era POW camp for German soldiers became a National Historic Site of Canada in 2013.

The site was previously a reform school of sorts for boys, but during WWII the government converted it to a POW camp.

The buildings have since fallen into disrepair, and graffiti covers many of the walls. But if you’re a lover of history, visiting the camp is definitely worth the visit.

You can find this nuclear fallout shelter in Horning Mills. A single man, Bruce Beach, began constructed in the 1980s, convinced that nuclear war will inevitably occur.

The tunnels descend 14 feet below the ground, and from there, visitors can explore the tunnels made from converted 42 school buses. The series of tunnels can house up to 500 people.

Beach welcomes visitors interested in viewing his work, but in return, he asks for a bit of manual labor to help maintain the tunnels.

When The Upstate Paving King Stopped In 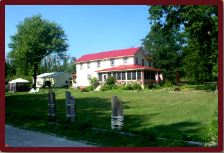 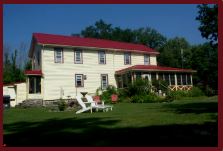